The store will not work correctly in the case when cookies are disabled.
Menu
Pre order
Verwachte release: september 2023

By changing out certain parts, the model can be assembled in "Normal Mode" or "Wilize Mode" when in combat.

The model is equipped with 3mm connection joints, making it compatible with parts from other Kotobukiya original series.

- The model can be assembled in "Normal Mode" or in the combat-ready "Wilize Mode" by changing out certain parts.

- The kit includes four face parts that have been pre-printed with tampography.

- Decals are included for users to create their preferred expressions.

- The kit includes a ring part (collar) for users to Engage with Yukumo.

- The magic circle connection part on her back has a HEXA G-R.A.M. joint with a 3mm connection point in the middle and is interchangeable with other magic circle parts from the ARCANADEA series.

- The shimenawa extending to the sides of her back is attached with joint parts and the angle is adjustable.

- The bells and shide parts on the shimenawa are articulated with ball joints.

- The "Normal Mode" leg parts use pop-out joints for the knee that can't be seen from the front when the model is standing, maintaining the shape of the legs while providing a wide range of movement.

- A staff is included as a special weapon. Each of the ring parts on her staff are articulated.

- A swordstick is included as a special weapon.

- The front of the skirt is made of multiple parts and can be adjusted without getting in the character's way.

- The large tail that extends from the waist with connection points can be adjusted up, down, left and right, according to the character's movements.

- The tail is made of three layers connected with ball joints and can be adjusted flexibly.

- The tip of the tail for "Normal Mode" has a joint and can be adjusted flexibly.

- A special stand is included.

- A special joint for the tail is included. Use the special stand and joint together for better stability.

- The kit includes five sets of PVC hand parts which are compatible with weapons from the M.S.G, Frame Arms, and Frame Arms Girl series.

- The 3mm connection joints on the model are compatible with parts from the M.S.G, Frame Arms, and Frame Arms Girl series. 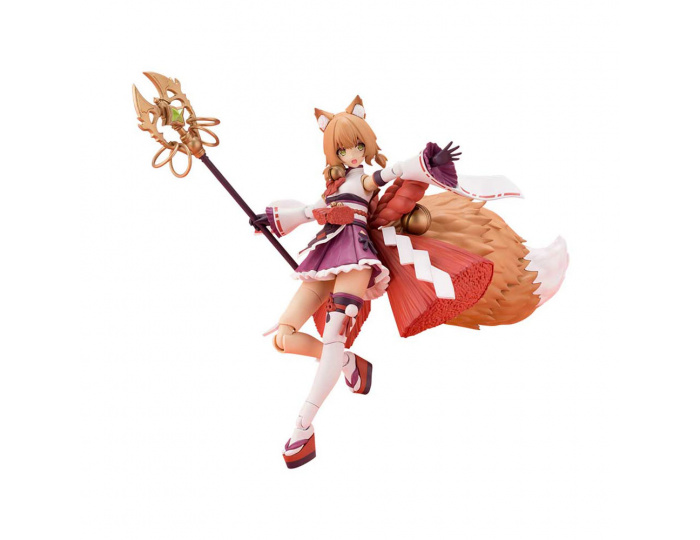