The store will not work correctly in the case when cookies are disabled.
Menu

Pay tribute to Alastor Mad-Eye Moody - the greatest Auror of all time and a Defence Against the Dark Arts teacher in Harry Potter and the Goblet of Fire. He was the pivotal member of the Order of Phoenix until the very end, he tragically died protecting Harry Potter from the Death Eaters.

During his time as an Auror, he picked a number of major battle scars and sacrificed his left leg and left eye in one of the battles. Nonetheless, he sees more than an ordinary man! His magical electric blue eye, kept in place with a strap, can swivel 360 degrees and allows him to look though the back of his head. Magical eye moves independently from his normal eye, giving him the nickname of Mad-eye Moody.

This beautifully crafted 1:16 scale figurine of Alastor Mad-Eye Moody captures Brendan Gleeson wearing his heavy brown overcoat with his arms clasped over his wooden, ram-headed staff. However, the staff is with a secret - it is a powerful weapon that cast spells and make magical buildings appear or send enemies flying backwards.

Alastor Mad-Eye Moody Figurine comes with a full-colour glossy magazine. The magazine looks at memorable moments of Alastor Mad-Eye Moody, a snapshot of exclusive scenes from Harry Potter and The Order of Phoenix plus a lesson from the Defence Against the Dark Arts teacher. 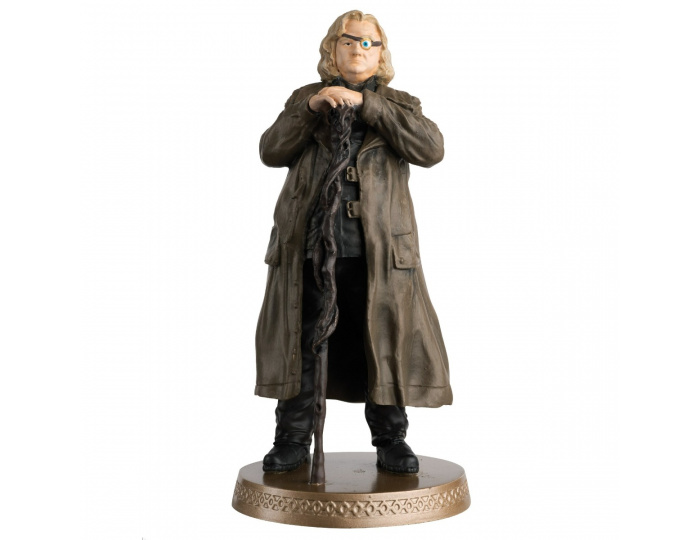